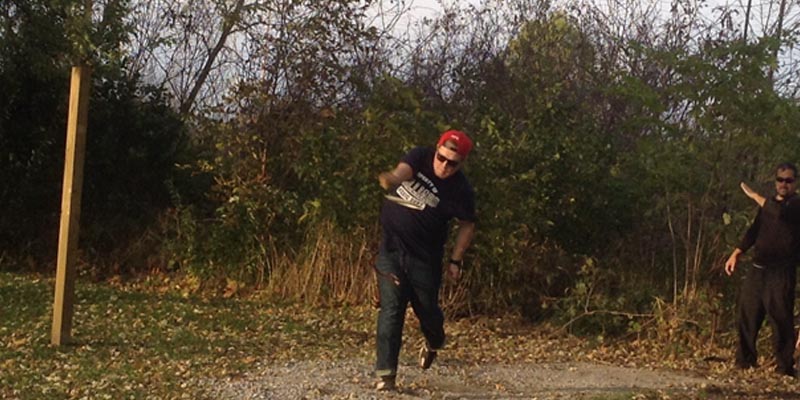 Why You Should Learn to Throw a Driving Putter

Whether you’re brand new to the sport of disc golf or a seasoned pro, driving w/ your putter is essential and will help lower your scores and keep your shots straight!

Why should you drive with a putter?

(1) If you’re new to the game of disc golf, the first disc you should learn to throw is a putter.  Putters generally fly neutral(straight). They are wing angle sensitive meaning tipping the wing up and releasing the putter will cause it to anhyzer.  Tipping the wing down when releasing your putter will cause the disc to hyzer.  Releasing the disc flat or slightly tipping the wing down upon release will allow the disc to fly straight, a friend to any player.
(2) There is no straighter flight than a putter.  If you’re an experienced player or just beginning, there’s no substitute for being able to throw straight.  The number one question in our store from customers is:  Do you have something that flies straight?  The answer, a driving putter.  What is a driving putter?  It’s a putter usually w/ a little added stability that sometimes has a bead for stability. We recommend a driving putter in a premium plastic.  This allows you to throw your driving putter at high speeds without worrying about hitting trees.  Hitting trees continually w/ base plastic will cause your disc to deform and change its flight making it fly understable.  Look for a driving putter that offers a comfortable profile in your hand while offering the grip you’re comfortable with.
Tips on driving with your putter. Generally we recommend a fan grip or modified fan grip when throwing a driving putter.  This will help your control.  A power grip is more beneficial for some mids and most drivers.  Timing is everything when releasing your driving putter. You’ll want to release the disc ‘on time’.  Releasing it too early will cause the disc to travel left if you’re RHBH.  Releasing the disc late will cause the disc to travel right if you’re RHBH.
Properly releasing the disc out in front of you at 12 o’clock w/ your thumb pointing forward upon release will allow the disc to travel straight.  This is crucial for throwing tunnel shots or straight approach shots to the basket.
If you’re trying to get further distance when driving with your putter, you must throw the putter with height and follow through.  This allows the putter to travel at greater distances giving it time travel as it’s higher in the air.  You can’t snap your putter like a driver when releasing or release it too low.  If you do, the disc will turn over from too much force/spin. If it’s thrown too low it won’t have time to glide or carry the necessary distance you’re trying to obtain.
After selecting your driving putter, take it to an open field and let it rip!  Release it up to 50 or more times to get the feel and timing you’ll need to release it correctly.  Follow that by taking it to a course which offers tunnel shots.  This will be tricky at first but don’t give up, once you develop the proper release timing with your new driving putter you’ll conquer a huge stumbling block for most throwers—throwing a disc straight!
Disc Ranges